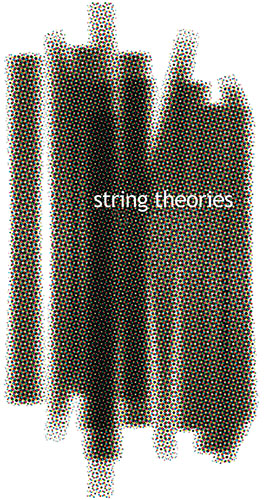 An exhibition curated by James Manning

The string theories exhibition was perhaps the most ambitious and fully realized exhibition I have curated to date.
This project combined my personal interest in science, new media art and music.
I worked closely with this group of artist (Paul Andrade, Lou Cohen, Keith Francis and William Frese) for more than a year in the production of string theories.
Each of the artists brought their own unique ideas in to the mix, and each of them in turn influenced the work of each other to create a unique gallery exhibit.
The gallery exhibit was enhanced by a series of lectures and concerts which further explored and played with the concepts of string theories, going beyond simply art presented on the walls.

It was especially exciting for me to be able to collaborate with  Washington Taylor, Professor of Physics in the Center for Theoretical Physics at MIT and to have his take on the relation between actual science and the artwork interpreting those concepts.
I believe this kind of crossover between art, science and technology needs to happen far more often.

As one of the most debated concepts in physics and all of modern science, part of the allure of string theory is the controversy it generates.
There are some who believe it is the future of science and that it truly explains all, while others believe it to be the clever work of science fiction.
Throughout history there has been a connection between artist and scientist. This project continued the tradition was a launching pad for discussion amongst artists, academics and students in the Boston area.

The four artists in the string theories exhibition are not making scientific illustrations, rather they are providing their own impressions of specific elements contained in the overall concepts of string theory. The objective of this project is not simply to present thoughts on string theory but to offer insight on the ideas presented in the artist’s works and to be a part of the education and outreach process. The particular challenge artists face here is that string theory gives the artist no audio, visuals or anything else that is tangibly recognizable to work from.

Paul Andrade, explores the ideas of parallel dimensions and ‘branes’ in his thickly layered paintings arranged in complex patterns.
Lou Cohen, presented a newly created site-specific multi-channel sound piece based on his fascination of excitation modes and the loop like properties of strings.
Keith Francis translates subatomic particle tracks and vibrations into colors and graphic forms.
William Frese explored the influence of vibrations on the properties of strings in his short film and the concept of multi-dimensions in his sculpture, which drew on the gallery space itself to add a layer of interactivity with the viewer.

Events held in conjunction with the string theories exhibition:

Thursday September 18, 2008:
A public reception with the artists at the NESAD/SU Gallery.

Tuesday September 23, 2008:
As a compliment to the exhibit in the gallery space and to help illustrate the connections between art and science, a lecture and concert took place at The C. Walsh Theatre, Suffolk University’s premiere performance space.
The lecture featured a presentation on the tenants of string theory by guest speaker Washington Taylor, Professor of Physics in the Center for Theoretical Physics at MIT.
The lecture was followed by a concert performance featuring Lou Cohen performing a laptop computer running Csound, a programmable synthesizer, representing one of the most recently developed electronic instruments. He performed with James Coleman, playing the Theremin, one of very first electronic instruments invented. They performed against the backdrop of William Frese’s short cycle film.

Friday October 3, 2008:
‘Opensound’ was a concert in the unique setting of the “string theories” gallery exhibition featuring Lou Bunk on electro-acoustic flim-flammery, Lou Cohen on laptop computer and Vic Rawlings on circuits and amplified cello.

Tuesday October 7, 2008 :
The artists presented their work during the gallery talk at the NESADSU Gallery. As part of the gallery talk, guest speaker Hong Liu, associate professor of physics at MIT, presented his research in string theory.