Presented here is an  on the Town time lapse video made from more than  1225 photos I shot, showing the entire day of Otto Piene: SKY Event at MIT on May 7th 2011. An image was taken every 30 seconds of the event.

Starting at noon and working through several rain delays, the video shows the progress of the assembly and inflating of two 75 foot tall ‘star’ inflatable sculptures which rose above the dome at MIT at dusk just as the skies cleared. 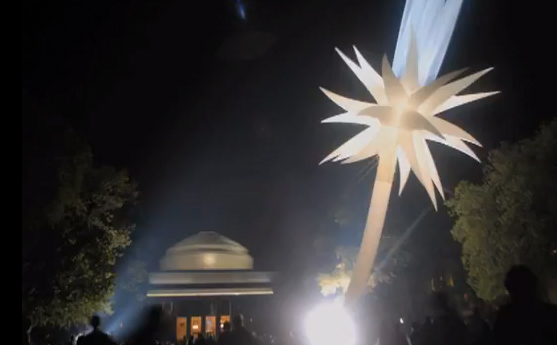 SKY event
Rising above the Great Dome of MIT, immense inflatable stars soared over Killian Court on the evening of May 7 during FAST Light, the culminating event of the MIT150 Festival of Art, Science and Technology. The sculptures celebrated — and incorporated — the distinctive symbiosis among artists, scientists and engineers that emerged at MIT during the 1960s with the founding of the Center for Advanced Visual Studies and continues today throughout the Institute.

This event began in the afternoon as the sculptures were arrayed on the ground and ­– with the help of a crew of students and alumni — started to inflate.

The stars launched at dusk and were fully illuminated at 9:00 pm, floating overhead while members of the crew and the audience kept them tethered to the earth. This participatory event was a collaborative art process leading to luminous images against the canvas of the night sky.

I am currently editing a separate companion documentary video of this event  showing behind the scenes  footage that I shot of the preparation and planning of this event.