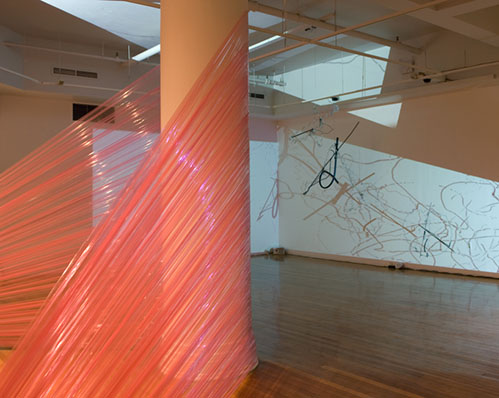 Using video and sculpture Boston based artists, Bebe Beard and Liz Nofziger transformed the NESADSU gallery space in to an interactive experience for visitors.

Bebe Beard’s installation titled Con•flict includes wall sized video projections of wire animated by magnetic fields.
The wire forms in these projections are in constant motion, sometimes small spring like bits slide about and at other points the entire screen is alive and in motion and at other moments a mass of twisted metal is at rest.
Images are seen endlessly looping and overlapping from multiple projections on the walls and ceiling.
The video projections are further enhanced by several wire assemblages hanging through the gallery space which cast shadows over and disrupt the projected images, adding a physicality to the flat space of the videos.
Using motion sensors, the assemblages being spinning as one walks the space, producing a constantly changing space and experience for the viewer.
Bebe worked with her time collaborator Lou Cohen to produce a sound component that adds many layers and further depth to the action and give life to the metal bits as they dance across the walls.

Liz Nofziger worked with the architecture of the gallery focusing on the corridor between the walls and the oversized structural column in the middle of the gallery space.
She created Muscle by using a pink translucent plastic film stretched around the support column and anchored it to the wall with steel hooks, Liz transformed the normally ignored building structure in to an imposing form that one cannot avoid. The tightly stretched material creates a tension in the space, as if at any moment this artificial ‘muscle’ could spring to action.
Projected on top of the column an enlarged ten foot tall image of a priest figurine slowly fades in and out another element of mystery and adding to the tension.
With a simple physical intervention Nofziger disrupts the flow of traffic within the gallery space and creates a new pattern.
Close investigation of this new transformation of the space will no doubt reveal even more hidden details. 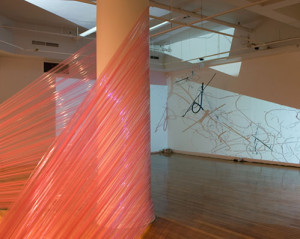 Bebe Beard earned her BFA in 1976, and an MFA from Mass College of Art’s Studio for Interrelated Media in 1996.
She has received grants from the Massachusetts Cultural Council, St Botolph’s Club Art Foundation and the Gottlieb Foundation Emergency Assistance; held residencies at Djerassi Resident Artists Program, MacDowell Colony and the Experimental Television Center in Owego, NY.  She has exhibited in galleries, alternative spaces and theaters throughout New England, the Southwest and in Chicago and New York. Her single channel work made in collaboration with Lou Cohen has been screened in festivals locally and worldwide in cities such as Auckland, Seoul, Barcelona, Cologne, and Puebla, Mexico.
Bebe is adjunct faculty at The New England School of Art & Design at Suffolk University

Liz Nofziger is a site-specific installation artist whose work examines relationships to space within the physical, architectural, political, and pop-cultural landscape. Employing a broad range of media including sculptural elements, video, light, audio, and text, viewer investigation completes her work. Nofziger received her MFA from the Studio for Interrelated Media at Massachusetts College of Art in 2004.
Her work has been shown nationally and internationally, including recently in a site-specific solo exhibition created and installed in Medellin, Colombia.
Solo exhibitions have been held at the Glass Curtain Gallery at Columbia College Chicago (Chicago, IL), Vox Populi (Philadelphia, PA), Kult 41 (Bonn, Germany), the Contemporary Artists Center (North Adams, MA), Montserrat College of Art (Beverly, MA), and Art Space (New Haven, CT), with group exhibitions at The Cheekwood Museum of Art (Nashville, TN), the Sante Fe Art Institute (Sante Fe, NM), and at the Judi Rotenberg Gallery (Boston, MA).
Nofziger has received numerous nominations, residencies, and awards, including an AICA Award for her solo exhibtion, Grate (Black Gold) at Second Gallery (Boston, MA), a nomination for the 2007 Boston ICA Artist’s Prize, and funding from The Massachusetts Cultural Council, the St. Botolph Club Foundation, and the Berkshire Taconic Foundation.
Nofziger is an adjunct professor at Massachusetts College of Art, works with graduate students at The Art Institute of Boston at Lesley University, and is the Managing Editor of ASPECT: The Chronicle of New Media Art, a biannual DVD publication of time-based work.