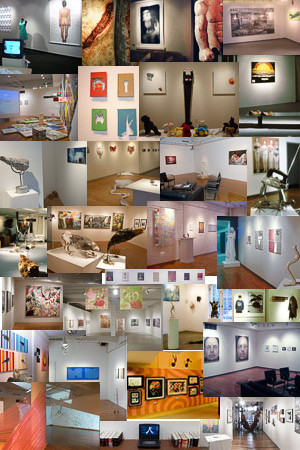 This page is the archive of exhibitions curated and organized by James Manning.

Curatorial assistant to Joseph D. Ketner with the preparation and install of the recreation of Aldo Tambellini’s “electro-media”  multi-media installation for museum retrospective exhibition.

Explore this exhibition on its feature page

The Secret Art of Dr. Seuss

Explore the page for string theories.

Explore the page for Nascent.

Explore the page for Objects and Interventions

We cannot display this gallery

Copley Society of Art, Boston, MA • August 2005
Curator and member of exhibition committee for memorial exhibition in memory of Kirsten A. Malone. The exhibition was a fundraising event for the Kirsten A. Malone scholarship established at the Massachusetts College of Art for female artists

Give me Some Truth: Theories Conspiracies Politics and Art

This was the second in a series of annual Boston art school student invitation exhibitions held at The Little White Box an artist run gallery at the Revolving Museum in South Boston.

Exhibition for the first winners and honorable mentions for the Stephen D. Pain Scholarship, held at Gallery fx a gallery dedicated exclusively to student artists.
The Stephen D. Paine Scholarship was established in 199 by the Boston Art Dealers association and is awarded to Boston area undergraduate art students.

Gallery fx, a.k.a First Expressions Gallery was a 501(c)3 not for profit art gallery dedicated exclusively to student artists in the Boston area.
From 1999-2001 James Manning was the director of the gallery at its located in Boston’s South End SOWA arts district.

The documentation and history of Gallery fx is currently being complied and will be posted here when complete.
–

ArtVigor was a not for profit art gallery located in Maverick Square, East Boston, MA

James Manning founded ArtVigor in 1997 and over two years, organized numerous exhibitions, film screenings and performances in the space.
Currently listed here are the major exhibitions, a more extensive history of ArtVigor including more photos and video from some of the performances held at the space is currently in the works, that material will be posted on this site when complete.
–

ArtVigor • August 1998
Meryl Hamiliton, Mary O’Malley, Bonnie Porter, Charles Giuliano and Kate Tarlov.
Installation of works that experiment with the new uses for traditional material and the ideas of what is intended by the artists and what the viewer see.
–

Fort Point Arts Community Gallery, Boston • 1996
Juried show organized by James Manning, included works from 36 artists selected from 75 entries from around New England and New York.
All artists in this exhibit were 25 years old or younger.