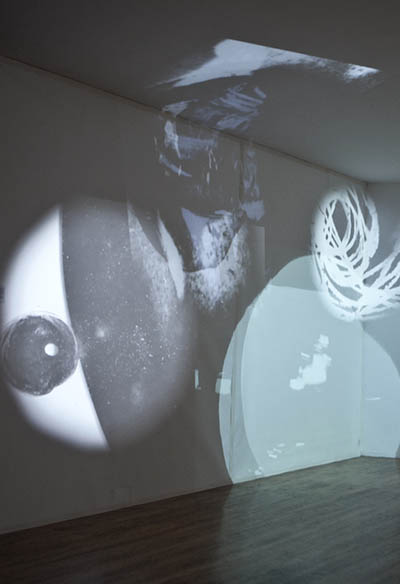 Exhibition presented and organized by the Bouris Lurie Art Foundation.

In 2011 a major retrospective of pioneering multimedia artist Aldo Tambellini was held at the Chelsea Art Museum in New York.
Along with dozens of paintings and sculptures, the exhibition featured a room of film and cathodic based works.

Using newly created digital transfers of the original film negatives, the installation included a selections of Tambellini’s films. This included: The Black Films series from the 1960’s; The Medium is The Medium, a television program that aired in 1969 on WGBH, Boston; Black Gate Cologne from August 1968 which was the first videotape made anywhere by fine artists for wide scale public broadcast, presented at WDR-TV, Cologne, Germany and Minus One an experimental film from 1969.

The centerpiece of the installation was  a video and sound installation, consisting of four projections overlapping and covering the walls and ceiling of the gallery using digital scans of the original hand made slides and film strips.

During the exhibition a live performance, Black Zero took place in this space, with participating artists and musicians including: Aldo Tambellini, Christoph Draeger, Henry Grimes, Ben Morea, and Kewighbaye Kotee.